Rolling a joint is so much more than licking a couple of papers and sticking them together. It’s art. It’s a ritual and just about every marijuana enthusiast testifies to how satisfying it is to roll an amazing joint. I like to call the art of rolling joints “spliffogami”. Thanks to the internet, joint lovers can perve on some incredibly creative joints. You can also learn to roll them if you have the patience and a lot of papers lying around.

So if you want to become a sensei master joint roller, you’ve arrived at the right page. I’m here to provide you with a little bit of inspiration. Potheads usually have a lot of time on their hands, too, which is imperative if you want to learn to roll some of the most complicated joints ever. And yes – we’re taking this much further than rolling the cross joint. That’s basically child’s play compared to some of the badass joints you’re going to discover in this article.

Sit down with as many packets of papers as you can afford. Try not to be stoned in the process of rolling because you’re also going to need as much saliva as possible. Now it’s time to get inspired – and to exercise a lot of patience!

Get inspired by Tom Greenhand

For those who aren’t already acquainted with Tom Greenhand, he’s probably the world’s most famous joint roller. Actually, this guy has made a career out of rolling joints for rich cannabis enthusiasts. He was once commissioned to roll a series of cool joints that replicated military weapons, including a replica of an AK-47. The man who wanted this set of joints paid Tom Greenhand $7,000 for his creations. It turns out that you can make a living out of spliffogami.

He isn’t just famous for his AK-47s either. He likes to make fully smokeable cool joints that look like cartoon characters and superheroes. Pikachu and Spiderman are just the beginning. He can make just about anything, like this cute little ice cream cone.

he Greenhand has als committed to joints that have moving parts, such as his Tommy Chong figurine. Put together, it was the full figurine of Tommy Chong. But of course, you could take his limbs and head apart and smoke them separately. Oh – and all of his joints are fully functional and smokeable. That’s what makes this spliffogami practical and worthwhile!

Unfortunately, I don’t have any instructions for you on how to roll joints that look like your favorite superhero. Your own creativity is needed for that one. But you can use Tom Greenhand to get inspired for the joints that I’m going to teach you roll in this article!

A step up from the cross-joint

The cross joint was made famous by our favorite stoner flick, Pineapple Express. It is made by effectively threading a second joint through the middle of another joint, creating a cross. It can be lit on all three sides of the cross, and is of course smoked through the fourth. Almost everybody has at least attempted to roll a cross-joint before, so to keep it interesting we’re going to step it up a level. This is a “3D cross joint”. It involves threading a third joint through the same vortex to give it a third dimension, such as in the photo below.

The first thing you want to do is a roll a long two,paper joint. Make sure you put a filter in the bottom of this one, because this is the one you will eventually suck on. With a paperclip, pierce a hole about three quarters of the way to the top of the joint. You are going to very carefully thread a second, smaller joint (one paper) through that hole. With your paperclip, pierce another hole that goes horizontally through the cross you have created. It will be perpendicular to the one you just added. You will thread a third joint (one paper, too) through that hole. With a strip of rolling paper that you’ve cut off, cover any holes that are created in the paper so that there is no place for air to leak.

Now beware. There are 5 ends to light on this joint. It is basically the equivalent of smoking 5 joints at the same time. Smoke with care and remember to share this joint with friends!

As the name suggests, this blunt looks like a submarine. It’s fun because it completely resembles your favourite childhood bath toy. If you’ve mastered the cross joint, then this one should come pretty easily. The bigger your submarine, the more weed you’re going to need. So make sure you’re adequately prepared!

For the sub-blunt, blunt papers are better than regular rolling papers. The colour and texture is far more appropriate. You want to start by rolling a fat blunt that will make up the body of your submarine. You can now roll another, thinner and slightly shorter blunt. You are going to pierce two holes through this one, the same way you did with the cross joint. Roll two smaller joints that you are going to thread through these two holes. You end up with something that looks a little bit like a television antenna (or a cross joint with an extra cross?). You will attach this to your submarine with some more blunt paper.

Again, make sure that there’s nowhere where air is leaking, because this will mean your blunt will smoke really poorly. Light all the ends, and get ready to go under!

This joint might be a perfect one to show up to your Halloween party with. It’s the perfect addition to a devil costume! It is really just another variation of the cross joint. Once you get used to sticking joints together, you can create almost any shape you wish. For this one, start by rolling a cross joint (there are instructions above). Before you light it, you’re going to attach two more joints. They shouldn’t be long enough to pass the top of the middle joint! You will attach one (at a right angle) to the left side, and you will do the exact same thing on the right. The final product is a pitchfork! 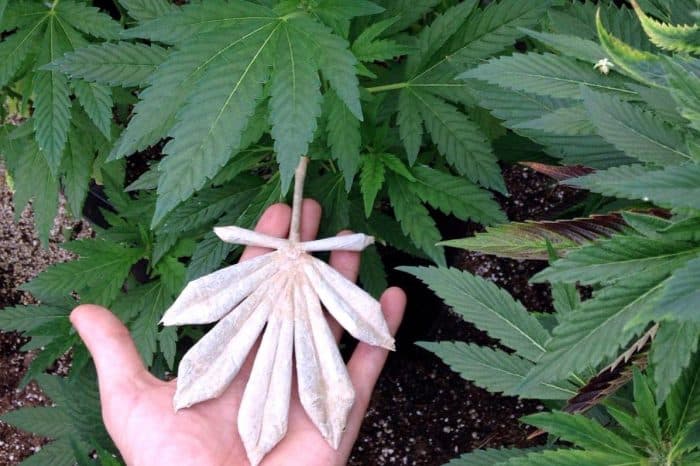 This one is a personal favourite of mine, because it’s an ode to what you’re about to smoke. This joint takes forever to roll, so make sure you feel like exercising a lot of patience. It looks just like a marijuana leaf, and is made up of a total of seven joints. That’s of course if you want your marijuana leaf to be seven pointed. If you’re lazy, it might only be a five pointed marijuana leaf. Well, you get my jist.

Start by rolling a long joint to act as your stem and middle point. You won’t be threading joints through the same way you did with the cross joint. You have to attach them all separately. You’re going to attach six more joints. Two of them should be smaller, another two slightly longer, and the final two slightly longer again. This will create the fan shape that is so characteristic of a marijuana leaf. Attach them all according to the photo below. Make sure you pierce small holes where you are going to attach the six joints to make sure the air flows through them smoothly!

A joint as long as your arm 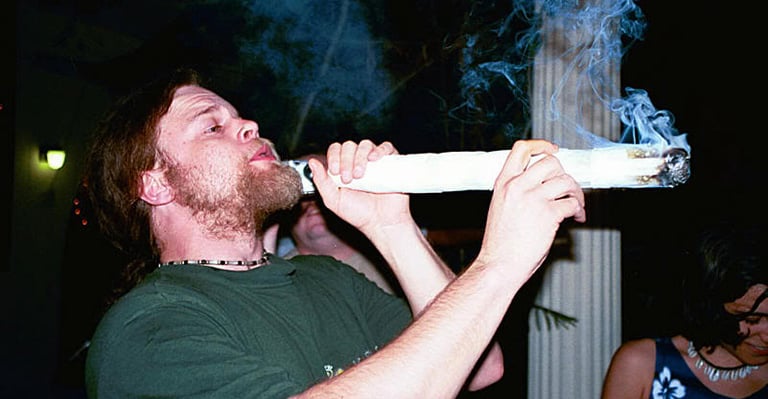 Someone once offered to roll a special joint for my birthday that contained as many papers as the length of my body. It’s a lot of papers – and I’m a pretty short human being. So this can be a very creative endeavour for those who want to get their spliffogami on. The thing about a really long joint is that you have to anticipate the width, too. If it’s too skinny, it won’t hold together. So you want to start with at least the width of two papers, if not three, depending on how long the joint is going to be.

It can also be really hard to roll a mega long joint with only two hands. It can require the synchronized movements of four hands. Finally, you need to make a pretty decent sized filter so that there is some stability in the bottom. Ensure that you have ample weed to roll a super-duper long spliff, and make sure you hold it correctly when smoking. If it’s really long, you probably need to hold it with two hands!

I hope you feel inspired to roll something that’s a little bit more than your regular joint! Enjoy smoking your artistic creations!

6 Instruments You Want To Develop Weed At Residence