Is Weed Authorized In Chile?

Chile is one of the most developed countries in South America. It’s a country spanning several distinct climates, from deserts in the North to glaciers in the South. It’s also a country that loves cannabis. Although recreational weed is not technically legal in Chile, there are some laws in place to protect personal consumption.

Disclaimer: We cannot guarantee the accuracy of this article at the time of reading. We take no responsibility for any inaccurate information.

Consuming weed in Chile is legal only if you have a medical marijuana prescription. If you have a prescription, then accessing it is as easy as walking into a pharmacy. Provided that the certain pharmacy stocks medical cannabis of course.

In 2015 Chile legalized medical weed while Michelle Bachelet was President. Since 2015 the availability has expanded across the country, however, it can still be very hard to access for some. Furthermore, Marijuana Doctors reported that a monthly supply can cost around $310 USD per month. 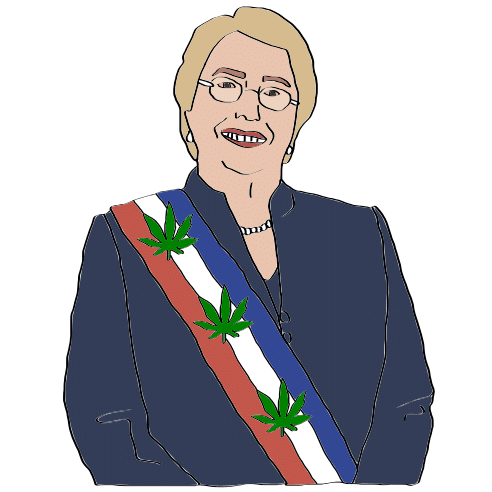 Then President Michelle Bachelet (weed leaves may have been added)

Although recreational weed use in Chile still isn’t legal, it has been decriminalized. In 2015 the country removed weed from the hard drugs list, effectively reducing legal repercussions users may face.

Provided cannabis isn’t used by minors, and is used on private property with amounts not considered commercial, users can be (somewhat) at ease knowing they won’t face criminal prosecution. It is still technically illegal, however, and discretion is always advised.

As a whole, Chile’s weed laws are relatively relaxed compared to some other parts of South America. The country also has the highest rate of weed smokers on the continent, with 11.83% of the population reportedly smoking pot. This puts the country at fifth in the world, behind the US and Canada, but ahead of Australia, France and New Zealand.

In the capital city of Santiago, seeing people smoking weed is fairly common. This is also true in the countries other larger cities of Valparaíso and Antofagasta, although to a lesser extent.

As a whole, Chile looks set to be one of the next countries to make weed legal in South America.

Related:
The Weed Situation of Colombia